I have finally got everything together and published “Annabel Lee & Eldorado”!

If you click on the image below you can go to Blurb, see a preview and order it directly: 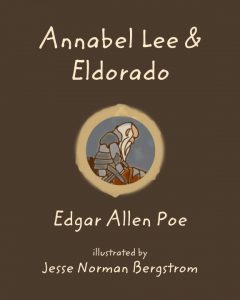 I have been filling these doodle books with marker doodles for a couple years. They are pretty fun and I thought I would share.
I am working backwards on one I finished. Here are the first five pictures.

Hezekiah asked me to draw a seal… This is what happens.

I am pretty sure Abram asked for Pig!

Having fun at swimming lessons…

Riding in the car on the way home from Iowa.

The boys asked for a giant hedgehog attacking a castle.  What more could you ask for.

So some friends of ours, the Gerjets, have been working on opening a new bakery called ‘The Bread Box‘ in Minot, ND.  They were kind enough to ask me if I would do their logo design!  Below is the final product… and a little bit of the journey to reach it. 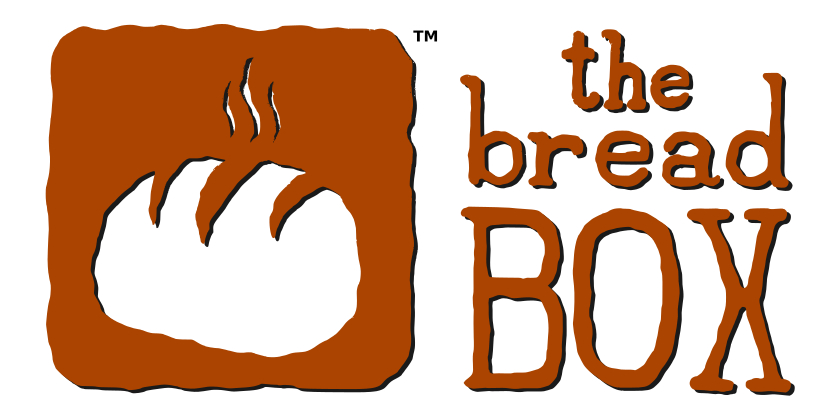 We started with some inked sketch ideas to see where Brandy and Travis wanted to go. 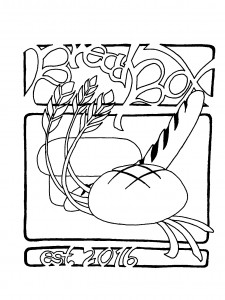 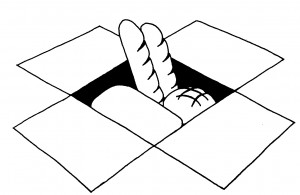 Abram even sent them one of his own design! 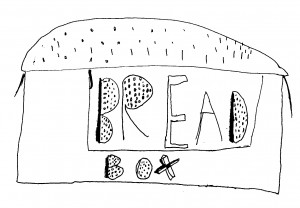 They decided they wanted to work on the block design as it matched the type of bread better and they really wanted a logo they could use as a stamp.  So, we did a couple variations around the block design to narrow it down.

Box with Wheat and Star

Box with Steam and Type

After that we did some minor tweaks with font, added color and voila!

Hope you liked seeing the process.

I had a lot of fun working with Brandy and Travis on this logo.  Hope they like it as much as I do.

For Christmas she got me a 365 art-a-day book.  It has a page for each day describing something ‘Art-y’.  Some pages are about specific paintings, some about artists and some are exercises.  This is  one of the exercises.  I actually did it on my iPad instead of paper.  It didn’t come out too bad…

Hope you all enjoy it. 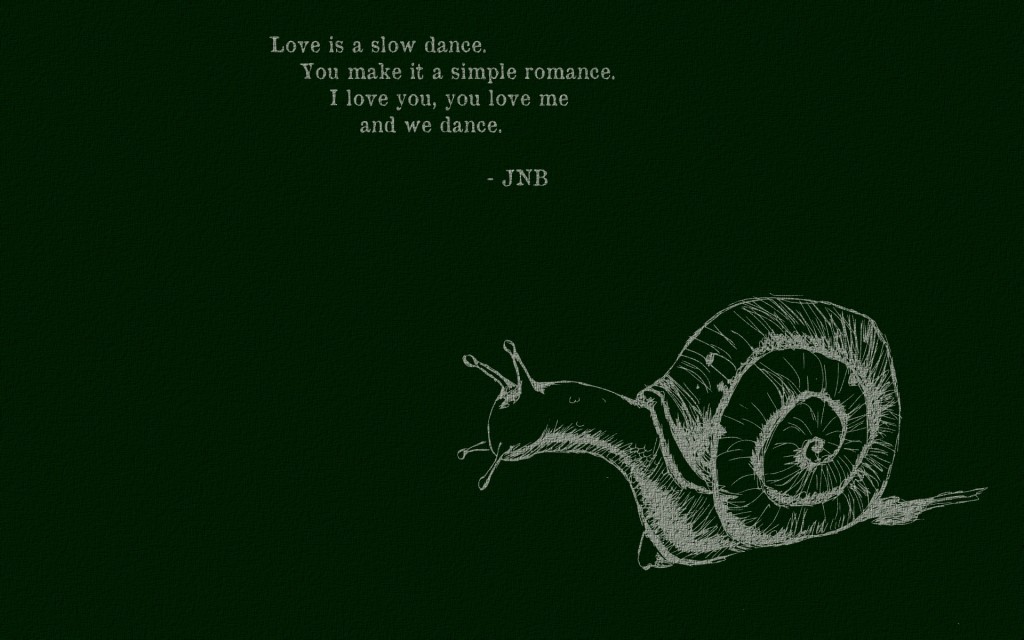 Oh, and I did write the poem as well… not great but I got a chuckle from Jamie (as intended.)

Here are the previous desktops…

So, as my wife, my 3 boys and my brother-in-law all went to visit my brother’s (who is deployed to Afghanistan) wife and their 2 kids.

I added for my own pleasure : A castle, Mount Fuji, the Sun, a bird with nest and a picnic on a hill. 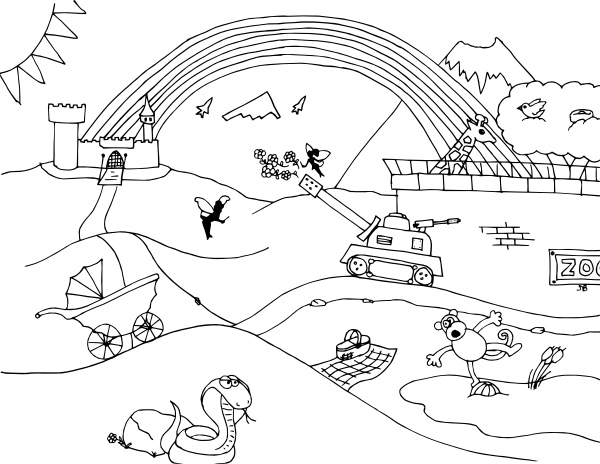 Some of you may have seen a couple of the desktops I have made for Jamie over the years.

Got to say I have not quoted Johnny Cash before.  So, this year is special!  Hope you like it I enjoyed making it. 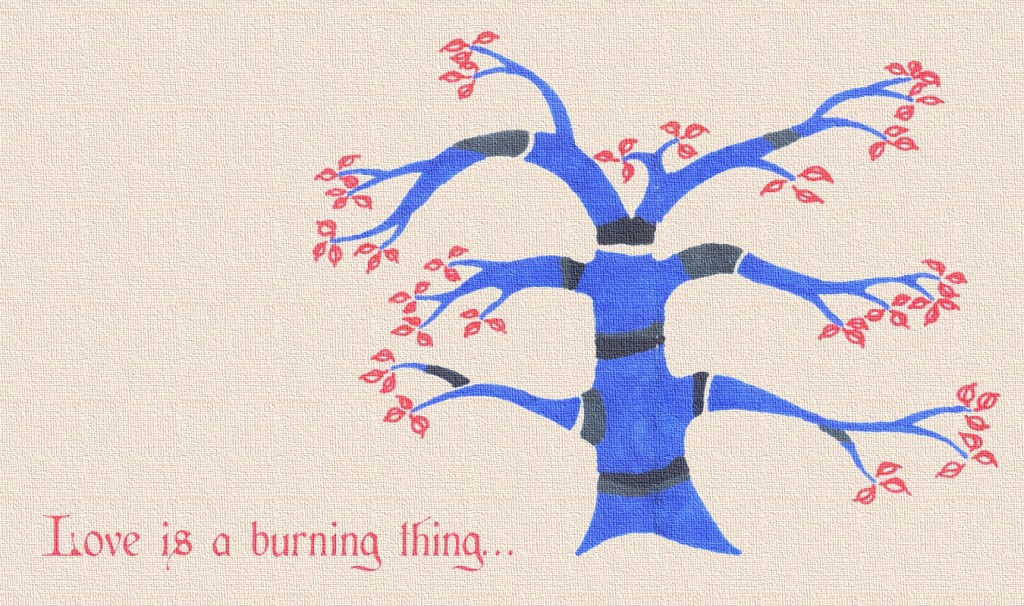 I have been sketching a few LOTR characters in a cartoony look. I started with Gimli and Leglolas and Jamie requested I do Eowyn. It took me as long to do her as both the other two. I have determined drawing women is harder than men…

This is what I get for breaking out the Lord of the Rings DVDs (Extended Edition). 9-12 hours (over 4 weeks) of watching plus a few hours of drawing sucked up…

I left some of my construction lines on Gimli (thought some of you might like to see more of a work in progress). The other two are really just sketches (not finished yet). 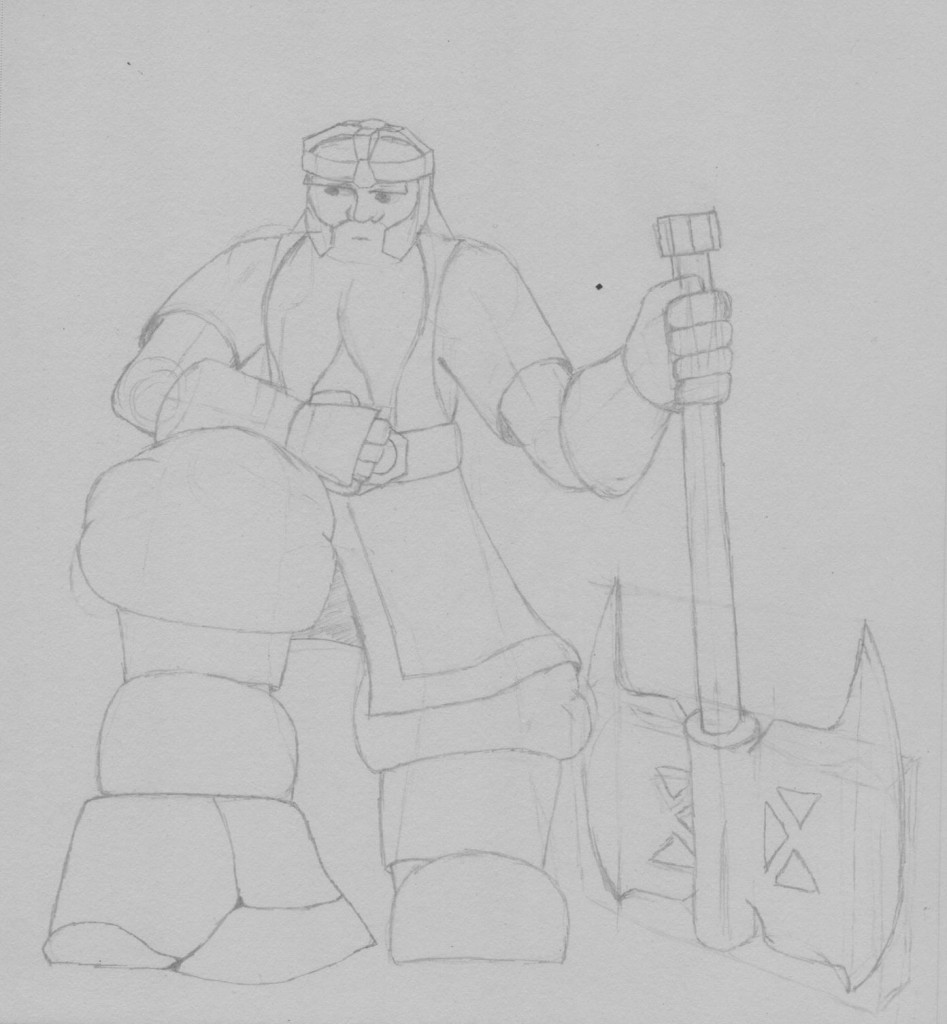 Legolas – Shooting down an orc? 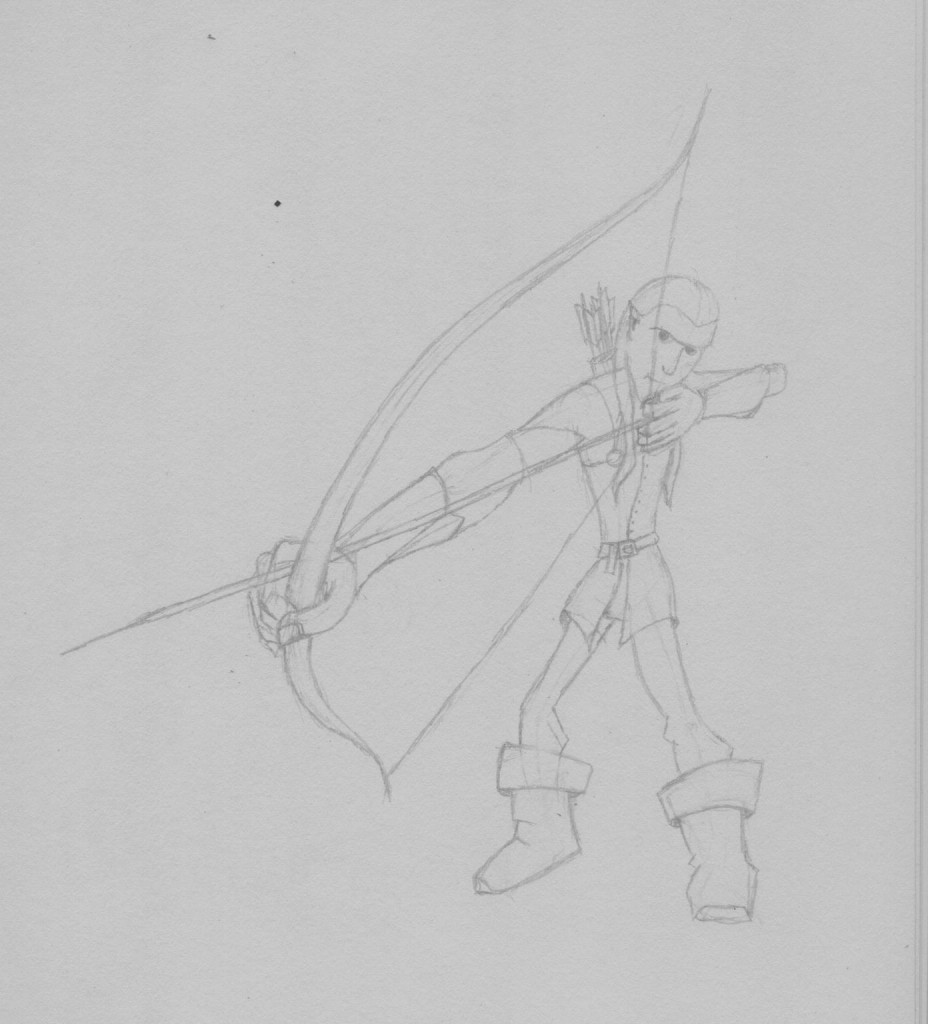 Eowyn – Getting ready to be smashed by the Witch King! 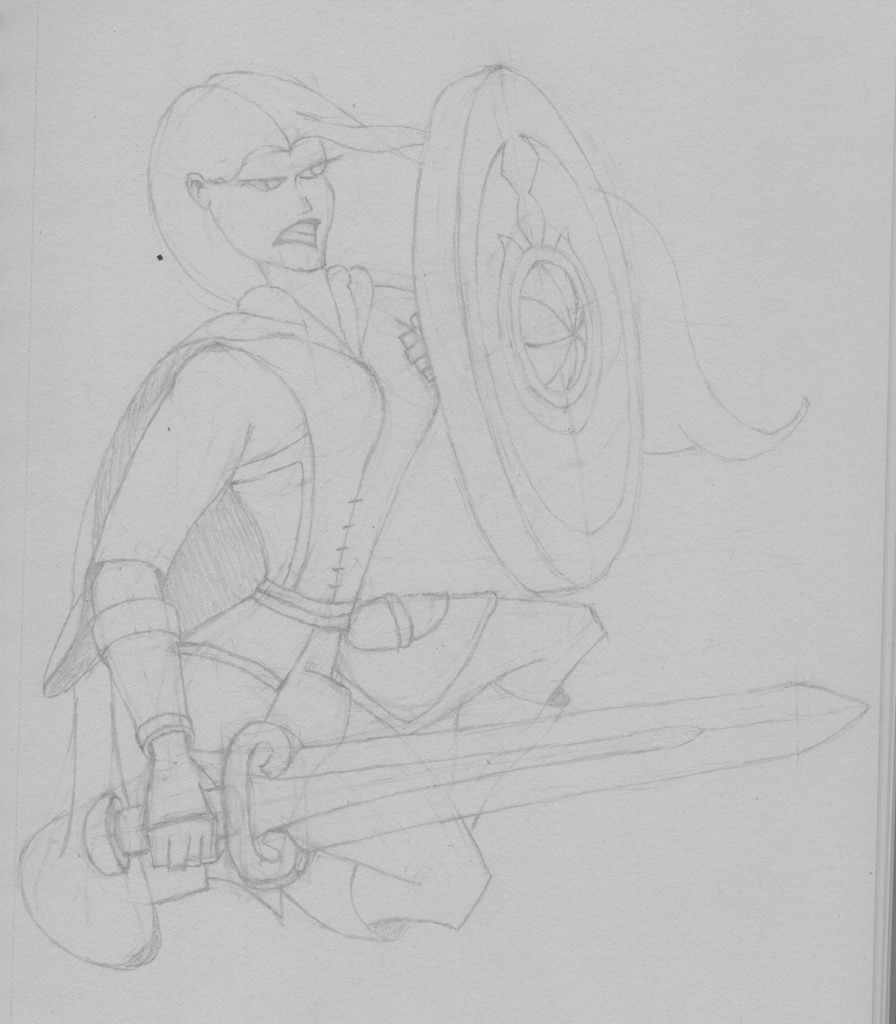 Jamie was thinking I should have gone ‘princess’ instead of ‘warrior’ on Eowyn.  But she approved anyway.

Well here is the last Verse and final illustration for Eldorado by Edgar Allen Poe.

I know it has been a little while since the last post… I was not 100% happy with the final page. But I did some final color tweaks and am now satisfied.

“Over the Mountains
Of the Moon,
Down the Valley of the Shadow,
Ride, boldly ride,”
The shade replied-
“If you seek for Eldorado!”

Here is some detail on the boy… 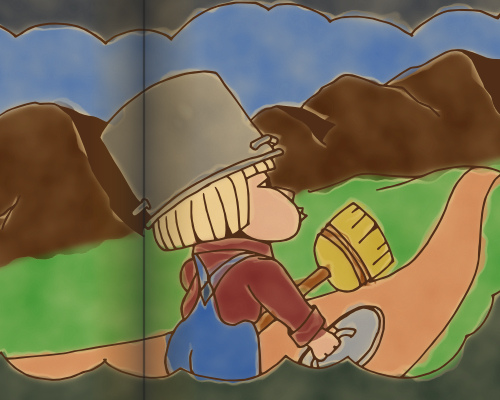 This page may change slightly in the finished product.  I am planning on doing this together with Annabel Lee also by Poe.  This illustration will tie the two poems together.  We will see as I work on Annabel Lee.

This is one of the two verses I always remembered Mississippi quoting from Poe’s poem in John Wayne movie Eldorado (or on IMDb).

And, as his strength
Failed him at length,
He met a pilgrim shadow-
“Shadow,” said he
“Where can it be-
This land of Eldorado?”

Some detail on the Hezekiah’s kitty… 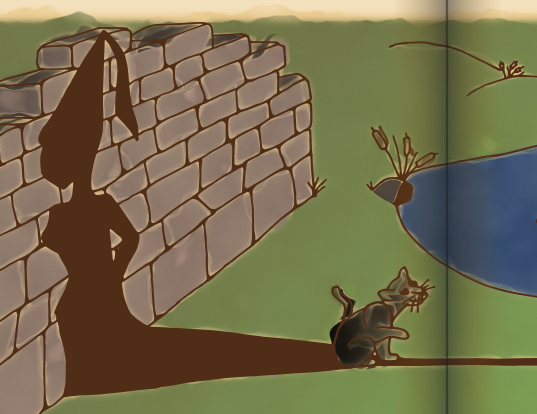 On we continue with Edgar Allen Poe’s Eldorado…

I love how this illustration came out.  I had doodled a valley and tree like this before and always wanted to use it for something more.

Here is some detail on the knight and the flower… 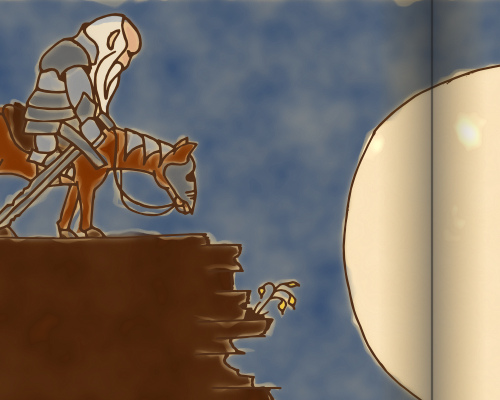 
Warning: count(): Parameter must be an array or an object that implements Countable in /homepages/1/d355417949/htdocs/jesse/wp-includes/class-wp-comment-query.php on line 405